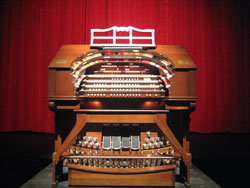 The Strand’s mighty Allen theatre organ was originally purchased by Mr. and Mrs. Tom Hamilton in 1999 for installation in their Columbus, Ohio residence. At the time it was built by the Allen Organ Company of Macungie, Pennsylvania, this four-manual, 33 digital rank instrument was the largest stock theatre organ built by the Allen Company. It was through their generous gift of the organ to the Atlanta Chapter of the American Theatre Organ Society that it was possible to install the instrument in the Earl Smith Strand Theatre.

In 1971, the Allen Organ Company introduced the first digital computer organ with revolutionary technology that changed the entire world of sound production. The digital computer organ was the first musical instrument to use digital sampling, a process by which recorded sounds are stored in digital memory for accurate sound reproduction. Since 1971, many advances have been made to digital technology with Allen being the first company to develop a fully software based organ. The Strand’s Mighty Allen is one of those instruments. This Renaissance organ includes many advances in the realistic production of pipe organ sound. The instrument’s sound samples include attack, steady state, decay, and note-by-note voicing capability.

The Strand’s Mighty Allen Theatre Organ has been custom voiced to the Strand’s 531-seat auditorium by house organist Ron Carter and Allen technician Alan Buchannan. In addition to the revolutionary technology used in building this instrument, the placement of 30 ninety-pound speaker cabinets powered by sixteen 100-watt amplifiers and arranged in the large pipe organ chambers on each side of the proscenium arch magnifies the realism of the theatre pipe organ sound.