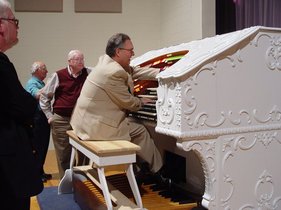 In 1923, the Page Organ Company of Lima, Ohio followed the lead of other respected church organ builders such as Möller and Kimball and began to produce theatre organs. In the ensuing years, they built over 100 of these specialized unit orchestras, most of them for theatres in Ohio and the nearby states of Pennsylvania, Michigan, Indiana, and Illinois. But they did build instruments that went as far south as Tampa, Florida and the little town of Vidalia, Georgia; as far north as Minnesota and South Dakota; and as far east as Maryland and New Jersey. One of their organs was sent as far west in the United States as it was possible to go at the time:  Catalina Island off the coast of southern California.

The Page four-manual theatre organs were considered the crown jewels of the company*, but the first of the four-manuals was not sent to a theatre. Instead, the organ was installed in the WHT radio station in the Wrigley Building in downtown Chicago, replacing the Kilgen organ that preceded it. The history of the WHT Radio station states, “In 1927 and 1928, [Al] Carney was broadcasting from radio station WHT located in the Wrigley Building in Chicago. Because of his experience in broadcasting from many pipe organs, he drew up the specification for the kind of organ he wanted for radio broadcasting. The organ itself was built by the Page Organ Company of Lima, Ohio. It was a four-manual instrument which was quite unique in that it had the new Pageophone to imitate the Vibraphone, pizzicato touch on the Accompaniment, and Solo manuals and double-touch [second touch] on the Great, Accompaniment, and Pedal. The console was finished in bright gold and rose with beautiful wood carving, although it was built to be heard and not seen.”

On December 17, 1927, in the Lima News, the local newspaper in the Page Organ Company’s hometown, the following article appeared, and includes the usual excess in the description of instruments common in articles of the day...

ORGAN PLAYED
Instrument Made By Page Co.,
of Lima, Heard for First
Time Over Radio

The initial recital on the mammoth Page organ constructed for radio WHT Chicago, was given Friday night at the plant at McKibben and Jackson sts [sic]. The program was given by Mrs. Mildred E. Ewing, of Columbus, and P.G. Robbins, of Ft. Wayne, Ind.

The organ, said to be the largest ever built for a broadcasting station, will be on the air for the first time Christmas night from the Chicago station with headquarters at the Wrigley building. The instrument will cost in the neighborhood of $40,000, according to E.A. Williams, Jr., manager of the Page Organ Company.
The console is of the four-manual type, with 18 stops. It is known as the Deluxe model and is finished in polychrome gold and green. It is practically the same as the organ installed in Roxy’s theatre in New York City.

On the Christmas program, Al Carney will play and previous to his program an announcement will be made concerning the organ, which is considered a masterpiece.

The Wrigley Building where the WHT Radio Station was located was owned by chewing gum magnate William Wrigley, who also owned the Chicago Cubs Baseball Club and had purchased Catalina Island. Wrigley was so impressed with the WHT Page that he purchased a similar organ for the Avalon Theatre on Catalina.

In 1929, the WHT Page was moved to the Michigan Theatre in the town of Flint, Michigan, where it entertained theatre audiences until 1950. In “A Short History of the Page Organ” Rick McGee reports that the WHT page was removed by Bob Howland and installed in his residence where it remained for several years. William Mollema of Michigan explains that “Bob Howland was (I believe) an accountant hired by Butterfield Theatres - owners of the Michigan in Flint - to oversee the sale/donation of many of their organs years ago which is how he got the organ originally. Although he was an accountant, he was a very good theatre organist and orchestra leader in his younger years and played at the Michigan Theatre in Ann Arbor, MI.”  It was then sold to James Widdis who installed the organ in his residence where it played until it was again sold.

In 1977, the late Audrey Weber**, wife of the late Richard Weber**, who had opened a successful pizza and pipes restaurant in Marietta, acquired the Page to be used in a proposed pizza restaurant in Atlanta, Georgia. It was never used for that purpose but after coming here was stored in the warehouse of Winn Sound on Miami Circle, Atlanta, Georgia. According to Mr. McGee, the common question at that time was “What’s a Page?” An observation that “the organ probably would take up less space put together” led to the installation of the organ in the warehouse. As a result, the organ became the center of activity for the Atlanta Chapter of the American Theatre Organ Society and was played by numerous internationally known theatre organists. The dedicatory concert was performed by Dennis James. Lyn Larsen, Tom Helms, Carlo Curley, Kurt Von Shakel, and others played the instrument. Saturday night jam sessions were well attended and featured Atlanta radio station WSB personality and Fox Theatre house organist Bob Van Camp. Walt Winn (owner of Winn Sound), Rick McGee**, Jay Mitchell**, and others played as well. On occasion, Hector Olivera, then an Atlanta resident, would drop by and entertain the audience. The organ was also used for special holiday gatherings and in some productions of the local amateur theatre group TrisPro, in the capable hands of organist Bob Fountain**. After a couple of moves to other warehouse locations for Winn Sound, the organ was purchased by Mr. Winn in 1991 and donated to the Atlanta Chapter. At that point it was removed from the warehouse and stored in trucks at a local business.

Through the late 1980s and early 1990s efforts were made to find a home for the Grande Page. At the time, the Rialto Theatre, a 1960s movie house that replaced an earlier demolished movie palace, was being restored as a performing arts center by the urban Georgia State University. It would have been a perfect fit for the Page and there were some negotiations in that direction, which included the possibility of theatre organ performance classes at the university. A reactionary response from the music department and a demand that any organ should be a classical instrument ended that effort. It is worth noting that today there is no organ of any kind at that theatre.

It was that time that chapter member Jack Sandow** emerged as the champion of the Grande Page. He approached his friend, Dr. James Hallford, Superintendent of Schools of DeKalb County, who expressed interest in having theatre organ placed in one of the county high schools. Chapter members toured existing schools but were unable to locate a suitable facility for a pipe organ. At the time, Stephenson High School in Stone Mountain, GA was in the design stage. In 1992, a meeting was held between officials of DeKalb County School Systems and members of the Board of Directors of the Atlanta Chapter. The school system agreed to make building modifications to a planned 500 seat theatre in the new Stephenson High School, to include chamber space, an organ pit, organ console storage area, blower accommodations, and electrical and wind conduits. Jack Sandow became the project leader after the initial meeting and worked closely with Beers Construction Company and the school system’s engineer as design and construction progressed. Changes to the original construction plan came with added expense to the school system, so in early 1996 several members of the Atlanta Chapter escorted the district engineer, the district music director and the principal of the new high school to Dickinson High School in Delaware to hear a concert by Simon Gledhill, including a side trip to hear the Wanamaker Grand Court Organ.

During the years when the high school and arts auditorium were under construction, the Page was moved to the Gainesville, GA business of the late George Whitmire, where restorative work began. The console resided for a time at the home of Atlanta organ builder and theatre historian John Tanner**. Jack Sandow began releathering and rebuilding the Page chests in the basement of his home. Once the auditorium became available, members of the Atlanta Chapter began the installation. Both Lyn Larsen and Hector Olivera performed concerts at the school (on electronic instruments) in support of the installation. During the planning and initial installation, the Atlanta Chapter raised approximately $50,000 and expended countless volunteer hours on the project.

As the installation proceeded the frames were built, the chests installed, and the pipes and percussions put in place in the two chambers (rooms), along with a 10hp two-stage Spencer Orgoblo pipe organ blower to supply the wind for the organ. Through the generosity of John Tanner, a two-manual (two-keyboard) console was provided which enabled some of the ranks in the main chamber to be played while the organ was being restored.

As part of the process of restoration and renovation, the original Page console was stripped of its eighty years of paint, possibly as many as seven coats, and repainted. New stoprails were built and new keyboards acquired. Through the generosity of a chapter member, several thousands of dollars were provided for a computerized relay (Artisan, currently the Octoflex program) to replace the seventeen-foot-long electropneumatic relay. Eight additional ranks (sets of pipes) have been added to the original fifteen (see the rank analysis), and the original Krumet Horn that was parted out many years ago was reacquired. The Page tremulants, Xylophone, and Chrysoglott were rebuilt by Carlton Smith in Indianapolis, and the Vibraphone by the Alabama Chapter of ATOS and Carlton Smith. A great deal of work was done by A.E. Schlueter Organ Company in Lithonia, GA and John Tanner. Clark Wilson and Carlton Smith spent ten days in Atlanta doing specialized work and tonal finishing on the organ.

The partially complete organ was presented at the 2013 ATOS Convention based in Atlanta with Dwight Thomas playing the four-manual console. The dedication concert was performed in April of 2014 by Jelani Eddington, and included the high school bands under the direction of Quentin Goins and the chorus under the direction of Dr. Vada Coleman. The chapter conducts a concert series on the organ that has featured artists Richard Hills, Walt Strony, David Gray, Tedde Gibson, Nathan Avakian, and David Marsh. The Chapter hosts programs on the Page several times each year and the organ is often featured at school events and musical programs. In 2018 and 2019, the Atlanta Chapter and Stephenson High School hosted the ATOS Summer Youth Adventure, which brought young organists from across the country each of those years for a week of intense instruction in the art of playing the theatre organ.


(*) - Carlton Smith has discovered a photograph of an earlier four-manual classical Page organ sent to a theatre. A photograph exists of the console but no further information, including where it was sent, when, or what became of it. The WHT Page was the first of the great four-manual theatre organs.
(**) - All of these are recipients of the Atlanta Chapter’s Lifetime Achievement Award for their years of contributions to the Chapter and our mission.
Powered by