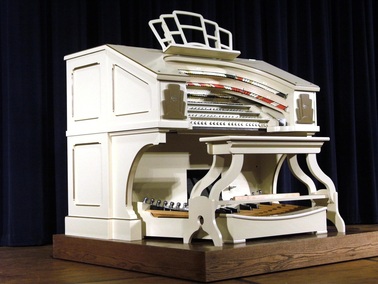 The 1926 Barton theatre organ was well received by an enthusiastic audience at it's inaugural concert on Saturday, March 26, performed by internationally known concert theater organist R. Jelani Eddington. The organ was originally installed at one of the Orpheum Theatres, and in 1964 was moved to Illinois by Dr. John Near. John lovingly reassembled the organ in his home. He corresponded and visited the organ's builder, Dan Barton, as he was learning more about the world of organs.

When it became necessary for the instrument to be removed, John searched for a suitable home for his beloved organ, and donated the organ to the Grand Theatre in Fitzgerald, Georgia. A.E. Schlueter Pipe Organ Company was selected to remove, rebuild and install the organ.

The organ console was rebuilt to fit the art deco styling at the Grand Theatre, and is lighted with color changing LED lights that can be set for the season, or faded from color to color. The console has 199 stop tabs, 15 general pistons, 5 dynamic pistons per manual and pedal, 10 divisional pistons per manual, and 5 divisional pistons for the pedal. In addition the toys and traps may be controlled from pistons and/or toe pistons.

The 12 h.p. Spencer organ blower which delivers 20 inches of wind pressure and was originally installed on a Barton organ at the Rialto Theatre in Middletown, Ohio.

Click here to view a copy of the inaugural concert program with installation photos.

Click here for the abbreviated online version of the Theatre Organ cover story from the May/June 2011 issue.
Powered by