We are a group of musicians, enthusiastic listeners, historians, and technicians. The only requirement is an interest in the theatre pipe organ, sometimes referred to as the "Unit Orchestra."

A chapter of the American Theatre Organ Society (ATOS), ATOS Atlanta meets monthly to hear theatre organ programs by members and visiting artists, work on restoration projects, and enjoy social activities revolving around our passion for these magnificent instruments.

Learn more about the theatre pipe organ below, or CLICK HERE to learn about joining our group!

About the Theatre Pipe Organ 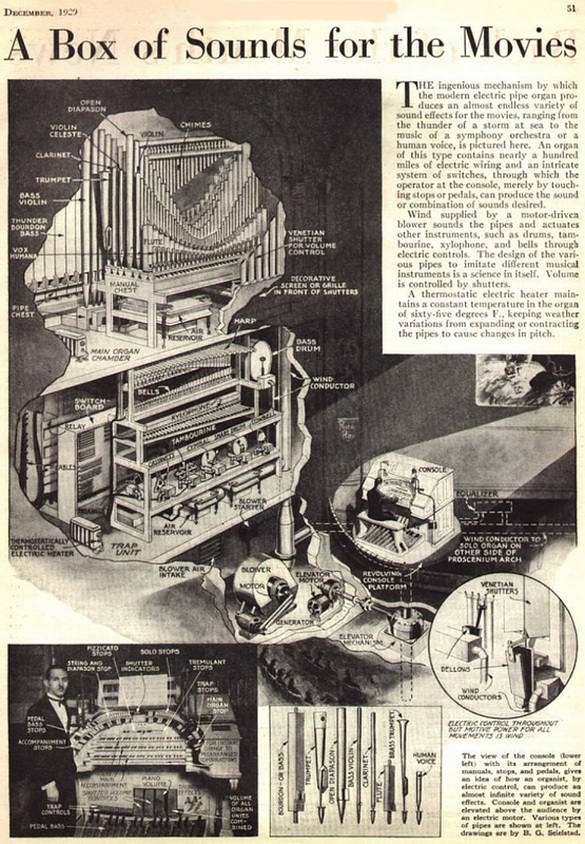 From a 1929 issue of Popular Science. Click to view a larger image.
During the hey-day of silent films between the mid teens and late 1920’s, the variety of entertainment venues across this country centered around vaudeville, silent movies, community sing-a-longs, and other live stage productions in movie palaces in every town, large or small. Thousands of movie houses depended on live musical accompaniment for their silent movies, and while some smaller houses merely had pianos, the vast majority had theatre pipe organs. While these wonderful instruments were not inexpensive, even back then, it was far more affordable to have a “Mighty Wurlitzer” with a few house organists on staff than to pay for a full orchestra or even modest band to perform in the orchestra pit every day.

These organs became wildly popular and several different manufacturers jumped on the band-wagon to join the Wurlitzer company in order to have an organ in every movie house in the land. These organs are also known as “Unit Orchestras” as they can emulate many different sounds from the orchestra – from pipe organ violins to flutes, oboes, trumpets, clarinets, and so on. Also unique to theatre pipe organs was the inclusion of tuned percussions such as chimes, marimbas, pianos, glockenspiels, xylophones, vibraphones, etc. Even a set of tuned sleigh bells was included in the more expensive models. In order to create that special mood for the silents, all sorts of sound effects and traps were also included. Items such as birdcalls, boat whistles, auto horns, doorbells, crashes and thunder, drums, tambourines, castanets, cymbals, and gongs were just some of the “toy counter” items available to the organist.

When the “talkies” became mainstream movie entertainment right around 1930, the production of theatre pipe organs came to a screeching skid. While some organs were used on special occasions for a few short years, many took over the namesake of their chief reason for being – they became “silent.” Some were destroyed when old theatres were torn down decades later, some were ruined and or vandalized, and a modest number of them found their way into churches and private home installations starting around the 1950’s. The American Theatre Organ Society (ATOS) was founded in 1955; several chapters sprung up around the country and a modest yet nationwide movement set out to save as many of these instruments as possible. While there were originally several thousand theatre pipe organs around the U.S. and U.K., today only a few hundred remain.